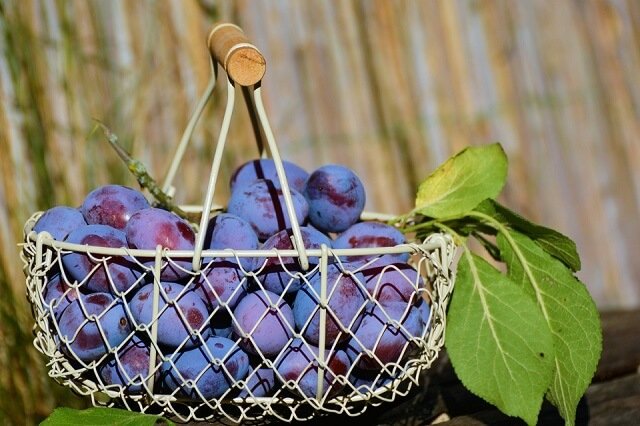 Plum trees can be a wonderful addition to many UK gardens. Plum trees are relatively easy to grow and can provide a bountiful yield each year. But as with all fruit trees, plum tree problems can arise from time to time, and gardeners growing such trees can be plagued by a range of pests and diseases. Growing your plum tree in one of First Tunnel’s fruit cages can make things a little easier. To further aid your plum tree gardening, we’ve put together this essential guide to help you take care of your plum tree.

Protecting a Plum Tree From Pests

When determining how to grow a plum tree, one of the most important things is working out how you can protect your tree from pests. As mentioned above, one option that can make growing a plum tree a little easier is growing your tree under cover, within a fruit cage, in a polytunnel, or under netting. However, whether you are growing your tree under cover or not, there are also other things that you can do to help reduce any potential pest problems.

For example, you can:

Plum tree problems can be significantly reduced if you choose the right varieties in the first place. There are many different plum trees, damson trees, bullaces and other related fruit trees to choose from in the UK. Gardeners should be sure to choose:

(Rootstocks for plums include Pixy, for dwarf trees, VVA-1 for semi-dwarfing, Wavit, a semi-vigorous choice with some chalk-soil resilience, St Julian, another semi-vigorous rootstock suitable for a wide range of conditions, and Brompton, a vigorous option for ‘full’ standard trees.)

When choosing where to grow your plum tree, it is important to take the environmental conditions and the soil type into account. Plums will do best in loamy, fertile soils with a pH of 6-6.5, but cultivars are available that can thrive in a wide range of different soil conditions, as long as they are relatively free-draining.

It is important to choose a warm, sheltered site and to avoid frost pockets, as plums blossom early in the year. Placing a plum tree against a south facing wall can provide extra protection where conditions are less than ideal.

Another key thing in any organic garden is to increase biodiversity as much as possible. Creating a diverse ecosystem, with a wide range of plants and wildlife which have a wide range of beneficial interactions can help to reduce pest problems and keep your fruit trees healthy.

The practice of choosing companion plants for a fruit tree is sometimes called creating a ‘guild’. A ‘guild’ is a collection of plants specifically chosen to aid a fruit tree and increase its yield. Members of such a guild might include:

A diverse range of plants around your plum tree can help to reduce the problems you encounter in your garden, and help make sure your plum tree is part of a thriving and resilient ecosystem.

No matter how much care you take of your plum tree, diseases can still arise. When they do, it can be helpful to be able to identify them, so you know what you are dealing with. Here are some of the most common plum tree diseases:

This bacterial disease can strike plums and cherries, and also other stone fruits such as apricots and peaches. It is identified by patches of dead bark on branches and ‘shothole’ (small holes in leaves). New shoots may die back.

Cut out all affected areas as soon as possible. It can also be a good idea to paint on a wound paint to protect the wound from becoming reinfected.

Honey fungus is one of the most common root diseases on plum trees. Roots that are affected will decay and a white fungus will often be seen between the bark and wood at ground level. This is caused by a number of different fungi and is one of the most destructive fungal diseases in the UK.

Plum trees affected by this disease must unfortunately be removed entirely. Care should be taken to remove as much of the root system as possible, after which non-susceptible plants should be grown in the area.

Another fungal disease, those one causes blossom wilt in flowers and fruiting spurs, and will cause a brown, spreading rot in the fruits. Severity of the symptoms can vary year on year and an attack can be concurrent with other diseases.

Again, removing all affected material as soon as possible can help to control an outbreak and prevent it from recurring more severely in following years. Brown rot infects a plum tree through wounds, especially those caused by birds, so netting or growing your plum trees and other fruit trees in a fruit cage can help by reducing bird damage. Plum trees can be susceptible to problems after pruning, so it can be a good idea to treat all pruned areas with a wound paint to reduce the risk of disease.

This fungal disease is characterised by the silvering of leaves and by branch die-back. It infects a tree through wounds, often those caused by improper pruning.

Following correct pruning procedure can help to reduce the likelihood of an outbreak. Affected branches should be removed and disposed of as soon as possible to prevent spread. Check out the information on pruning below to learn more about when and how to prune plums correctly.

Rust diseases can affect many plants and plums are no exception. While they will not usually kill your tree if caught quickly, they can reduce vigour and lead to low yields. Rust appears as reddish spots on leaves and shoots.

To control the spread of plum rust, remove affected leaves and parts as soon as possible.

If plums are distorted and fruits have no stones, this can be caused by a airborne fungal infection called pocket plum. Fruits are worthless and cannot be eaten.

This fungus is airborne, but removing affected fruits and shoots promptly can help to halt the spread of this disease.

When To Prune a Plum Tree

Pruning of young trees for shape is carried out after the bud burst in early spring, while established trees are pruned in the summer months. Pruning plums in the warmer months helps to reduce the risk of disease entering through pruning wounds. Plum trees should never be pruned in winter, as infection risk can be high during this time. If you are wondering when to prune a Victoria plum tree or other plum tree in your garden, a dry day in summer when it is not too hot is usually the best time.

How to Prune a Plum Tree

Plum trees can tolerate a thicker canopy than apples or other fruit trees. Generally speaking, pruning should be minimal. Pruning large branches should be avoided wherever possible due to the risk of infections. Aim to remove dead, damaged or diseased branches and any that are overcrowded. Aim for a well balanced crown and keep the centre free from shoots.

Thinning of branches on overgrown trees should be undertaken over several years to minimise the risk to the tree. Use sharp secateurs or a sharp pruning saw and take care to cut neatly. You may wish to paint wounds with a wound paint to reduce the risk of disease, especially where larger branches have had to be removed.

Do you have a plum tree in your garden? Share your plum tree successes and failures in the comments below.