Stopping Birds Pecking on Your Polytunnel

Spotting Birds Pecking on Your Polytunnel 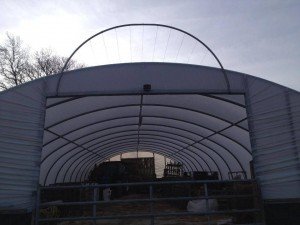 You can usually tell if its birds pecking the polythene cover as the holes tend to be a sort of “star-shaped”. It’s most likely to be when they have spotted insects on the inside of the poly tunnels polythene cover.

First things first, all is not lost. All you need to do is:

Keep the Birds off Your Crops

Try to make your polytunnel less attractive. Like they say, prevention is better than cure. Try using fly killers to exterminate any flies that could be knocking about. Less ‘food’ will make birds less attracted to your tunnel.

You could also try running a narrow piece of netting over the top of your Polytunnel to camouflage any insects trapped inside. Unfortunately, this will cut down on a little bit of light but it should deter those bothersome birds from landing on it as it makes a loose surface underfoot and will obscure the insects. Keep a good watch for any casualties, just in case any birds get caught up in it.

Another idea is to try stringing half a dozen CD’s between two tall canes above the length of the ridge.  The lines of wire along the top of the polytunnel should help to deter the birds from landing on the roof.

You may want to try creating shadows of birds of prey (I’ve seen stick on ones) on the inside of the polythene or just a simple scarecrow….with a bit luck, this should help to frighten the smaller birds off.