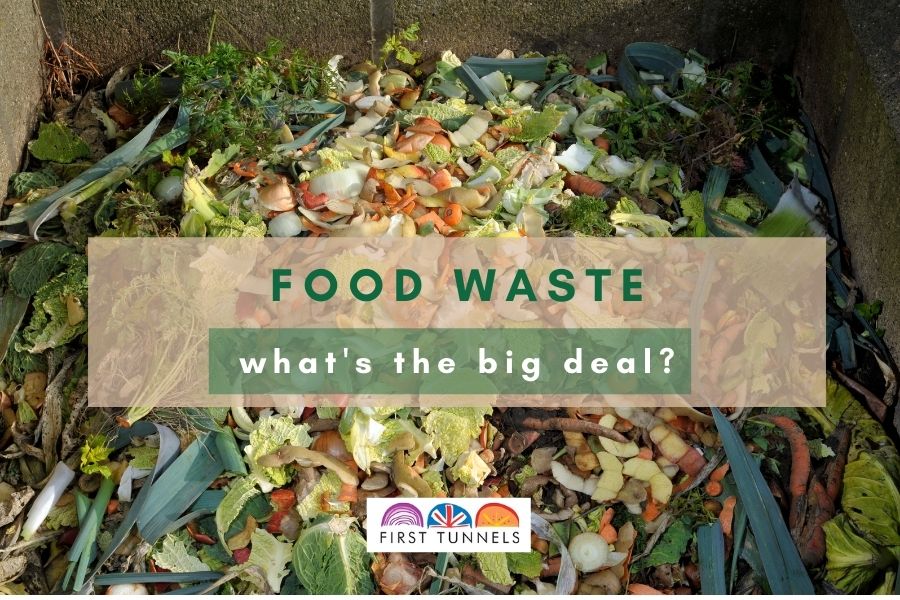 We live in a time where we have an abundance of food choices. Food shops and supermarkets offer us an endless supply of food. From fresh foods such as meats, eggs, dairy, fruits and vegetables, to frozen, processed and packaged foods. We are only limited by our budgets.

One of the issues we have with an abundance of food is that this has led to excessive food waste. It is estimated that one-third of the food produced in the world is discarded which roughly equates to about 1.3 billion tonnes of food that fills the world’s landfills each year.[I] Food waste is something we all need to address, but first we need to understand some of the food waste facts that lead to mountains of rotting food all over the planet.

So, what is the big deal with food waste?

How Much Food Is Wasted in The UK?

The Waste and Resources Action Program (WRAP) compiled a report in 2018[ii] that showed the UK produced around 9.5 million tonnes of food waste. While the bulk of this came from households, a considerable portion also came from manufacturers, hospitality services and retailers. The monetary value of this wasted food is said to be in excess of £19 billion per annum.

What is alarming about this trend is that this equates to 6.4 million tonnes of food that could have been consumed. Considering the poverty in many areas, this waste is unacceptable. The total amount of food wasted could have been made into 15 billion meals to feed the needy. Sadly, food waste in the UK accounts for just a small portion of global food waste. 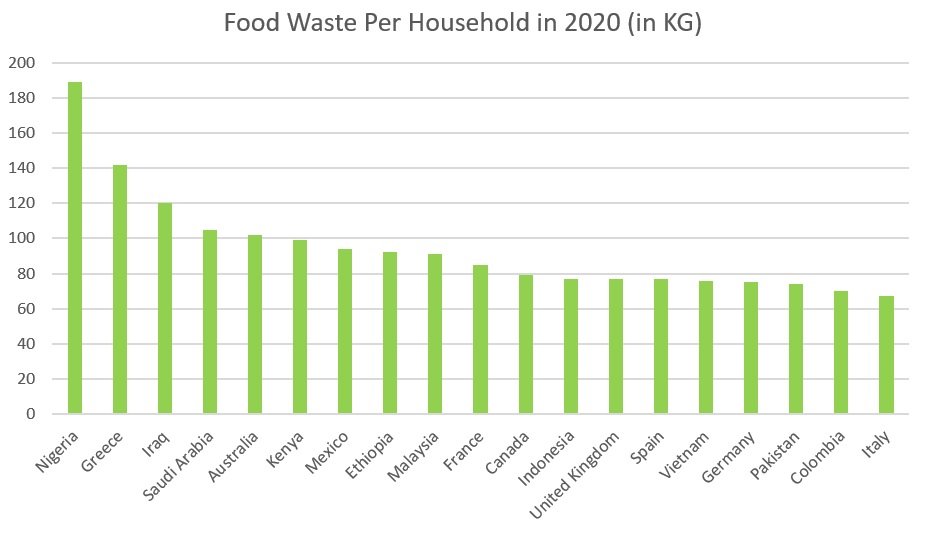 The chart above shows the average food waste per household in 2020. What is most alarming is that some of the countries with the highest levels of food wastage per capita are also some of the poorest countries in the world.  The level of waste is obscene when it could have been used to feed those who quite often don’t have enough to eat.

So, which country wastes the most food? According to the chart above, Nigeria has the highest rate of food waste per capita. What is alarming with this food waste statistic is that Nigeria is rumoured to be the poverty capital of the world. [iii]

The Problem with Food Waste

Food waste is not just a problem for the poor, the ramifications of those billions of tonnes of rotting food can be felt in every segment of society. While those that are wealthy may not experience an empty belly, food waste is something that we all need to come to terms with, one way or another.

When we break it down, food waste is a global problem for the following reasons:

Depleting the world’s supply of fresh water – Growing enough food to feed the masses requires copious amounts of water. It is needed to hydrate the plants and trees for fruits and vegetables but the water waste does not end there. Animals bred for meat need drinking water and manufacturers also use water to clean, prepare and process food to make it fit for human consumption. It is estimated that about 70% of the world’s water usage is used in agriculture alone.

The environmental impact – Food waste has a multifaceted impact on the environment. Feeding the billions of people worldwide has resulted in deforestation in many areas of the world. As the demand for food increases, more land is cleared to create agricultural plots for growing fruit and vegetables. Several hectares are also needed to grow the grains to feed livestock which is further adding to the problem.

Methane is also produced in overcrowded fields of livestock. Many animals are corralled into fenced lots instead of grazing in a pasture and their faeces also contribute to the methane cloud marring the planet.

Poisoning the earth – Producing enough food to feed the masses has led to mega-corporations using fertilizers and pesticides to ensure bumper crops. The chemicals in these fertilizers and pesticides are often poisonous and it is inevitable that traces of these remain in the food. Furthermore, these poisons leech into the soil and eventually end up in the world’s waterways.

Poor economics – Food waste affects us all economically and this includes our governments. Much of the food that is wasted is often imported and this impacts on the GDP (gross domestic product) of a nation. Manufacturers do not like to lose on their profit margins so when they are forced to dump the surpluses, they will eventually pass this loss on to the consumer.

Food waste is ethically wrong – It is absolutely obscene that so many billions of tonnes of food are wasted every year when so many people are struggling to have one decent meal per day. It is estimated that 1 in 9 people around the world are malnourished and have little or no access to adequate food[iv]. Sadly, as much of society demand more processed food, production increases and even more food is being wasted.

What Can You Do To Reduce Your Food Waste?

Supply and demand are what is driving the mass production of food and this also leads to excessive levels of food being wasted. Household food waste accounts for most of the food being added to landfills so it is up to each household and individual to do what they can to reduce the amount of food that ends up in the trash.

Can You Take Food Waste To The Tip?

In most cities around the country and the world, you can’t take food waste to the tip unless the specific tip has a facility that has been specially designed for food waste. You will need to check with your local tip before you take food waste to be discarded there.

What To Do with Food Waste

If you have a compost pile or bin in your yard, adding food waste will give you an ongoing supply of compost for your garden. If you don’t, you can consider the following ways to deal with food waste:

What The Government Is Doing

The UK government[vi] is taking a serious stance on reducing the amount of food being wasted and has thrown their support of several initiatives aimed at reducing the per capita food waste in the UK by half by 2030.

You Can Do Your Part

Reducing food waste is the responsibility of every consumer as we are the ones that drive the supply and demand chain. Plan your meals and try to reduce your mindless spending habits in the grocery store. Once you understand how to reduce waste, you’ll see the benefits financially and you’ll know you’re doing your part for the environment as well.